The activity of our company is subordinated to a single mission: to bring health through food to as many people as possible.

For almost a century, Danone Group has been producing healthy and delicious foods adapted to the needs of our consumers. There are four “Danone” businesses:  fresh dairy products, water, early life nutrition and medical nutrition. They are united by a single principle of work: to offer innovative and high quality products that meet expectations of consumers at every stage of their life.

The history of “Danone” began with a desire of the Spanish businessman Isaac Carasso to help children with digestive disorders. 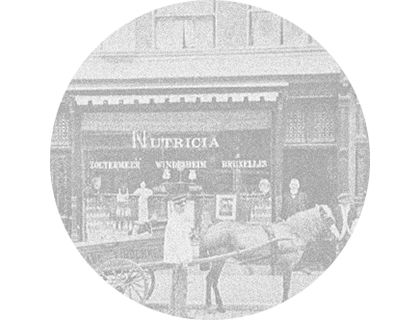 The company’s name Nutricia is based on the Latin word “Nutrire” which means “to feed”. The company's history begins in the Netherlands in the city of Zoetermeer, when Martinus van der Hagen introduced the world's first “kindermilk” formula based on the research of the German professor Backhaus in the field of optimum infant nutrition.

In 1906, “Nutricia” launches its first formula. It is a low-lactose formula for patients with diabetes.  Nutricia pioneers a path-breaking concept for specialized medical nutrition exactly with this formula. 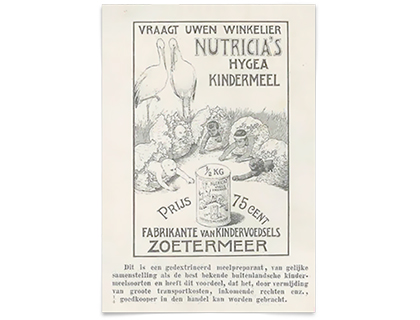 The first infant cereals formulas made with wheat, grain and barley were launched. 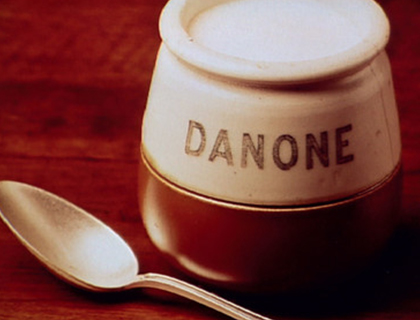 History of the company begins in Spain in the city of Barcelona. Isaac Carasso, pharmacist,   observes that many Spanish children suffer from dysbiosis and intestinal infections; he adverts to the works of Ilya Mechnikov, deputy director of the Pasteur Institute.

Ilya Mechnikov, in his works, provided detailed evidence of health benefits of yogurt, a product that had been known to people from the Balkans to the Central Asia for thousands of years.

Using cultures from the Pasteur Institute and the study of Ilya Mechnikov, Isaac Carasso introduces yogurt and launches its sale in the pharmacies under the “Danone” brand. 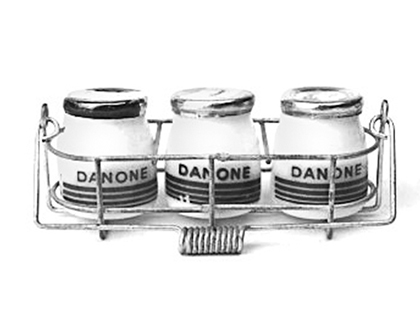 The College of Physicians of Barcelona officially confirms that yogurt is “a natural and healthy food product”. 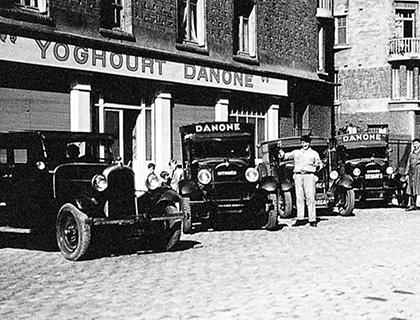 Beginning of Danone in France

On February 6th, 1929,  Daniel Carasso founds the Société Parisienne du Yoghourt, a company with a capital of 500 000 French francs.  That year he opens the first retail outlet on rue André Messager in Paris. He also creates the brand’s first advertising slogan: “Delicious and healthy, Danone yogurt is the right dessert for happy, healthy digestion.” 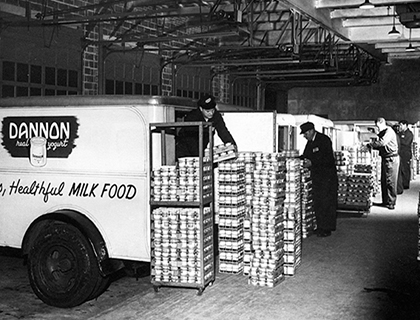 Construction of the Danone plant in Levallois-Perret

New Danone plant with the latest equipment, shiny steel tubes and snow-white rooms in the suburbs of Paris heralds a new era.

Daniel Carasso organizes effective inventory and logistics management for his factory, namely, a fleet of trucks to deliver products to retail outlets with sour-milk products and food stores throughout Paris and in the suburbs. 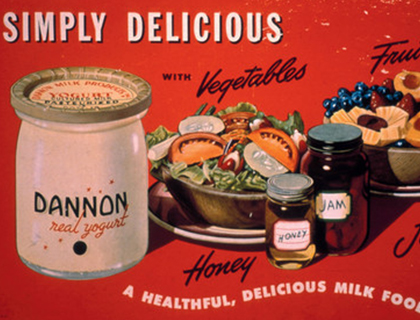 Daniel Carasso launches his company in the United States of America by purchasing a small Greek yogurt producer in the Bronx, New York. He creates logo and slogan. “Real yogurt” is written on the logo base line along with the name “Dannon”. 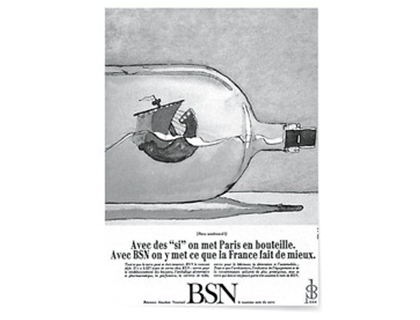 Creation of the BSN group

In 1942, Antoine Riboud, native of Lyon, starts working at the sales department of one of the glass factories. In 1965, Antoine Riboud is appointed to a position of Chairman of the Board and Chief Executive Officer.

Next year, the company, on its own initiative, merges with the company called Glaces de Boussois, and Antoine Riboud heads this newly formed “BSN” group. 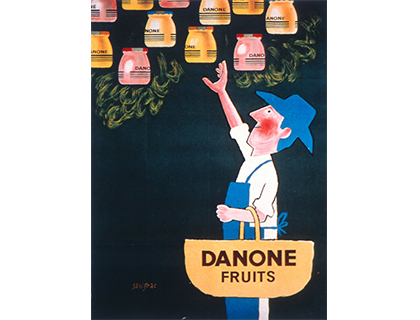 Investing in the food industry. 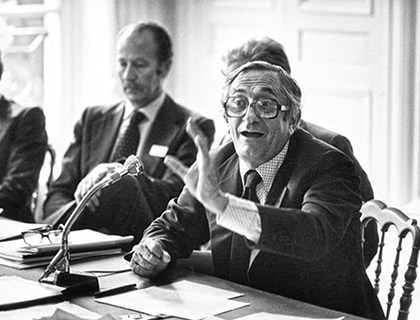 In a speech to 2,000 of executives of the leading companies in Marseille, Antoine Riboud emphasizes the importance of new business approach, namely the introduction of corporate social responsibility principles.

In his speech, Antoine Riboud calls for a special place of manager who cares about universal human values, and emphasizes a need “to act with people and through people”.

This speech is at the heart of Danone's corporate culture. 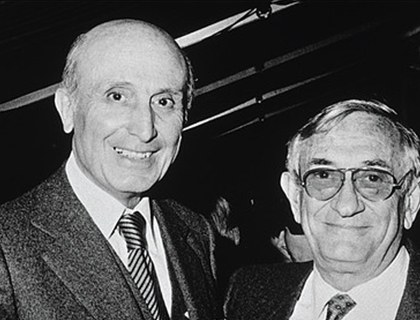 The story of the BSN-Gervais Danone merger is primarily the story of a 1972 encounter between Daniel Carasso and Antoine Riboud, two visionaries, at CEDEP, a professional development canter for executives that their companies had helped found a year earlier. Daniel Carasso wants to grow Danone internationally and sees in Antoine Riboud an unmistakable entrepreneurial talent. The merger between the two companies is announced in December 1972, and a food industry giant is born. 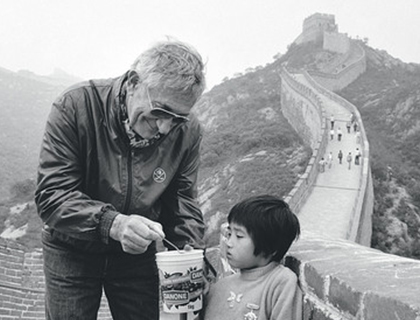 After Eastern Europe, the markets of Asia and Latin America become the company's next goals. Its first major Asian acquisition comes in 1991 with Hong Kong-based Amoy. 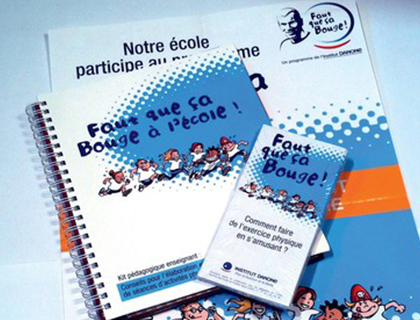 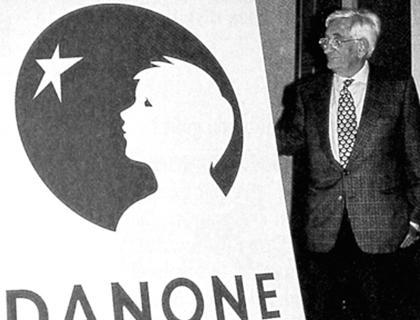 In June 1994, BSN-Gervais Danone shortens its name to Danone, a brand with global potential that is already familiar to consumers in 46 countries - and the source of nearly a quarter of the company’s sales. With the new name comes a new logo: a little boy gazing up at a star. The logo symbolizes dynamics and company's drive to move forward. 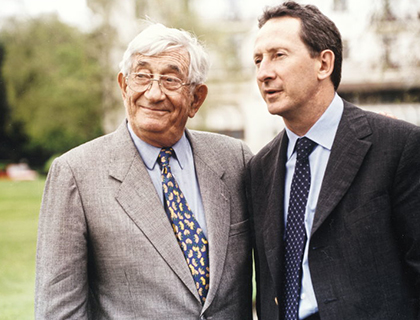 In May 1996, Franck Riboud is appointed CEO of Danone. Succeeding his father, he continues to expand the company on the international level, while focusing on the three areas with the greatest potential for growth and the strongest brands: Fresh Dairy Products, Beverages and Biscuits. 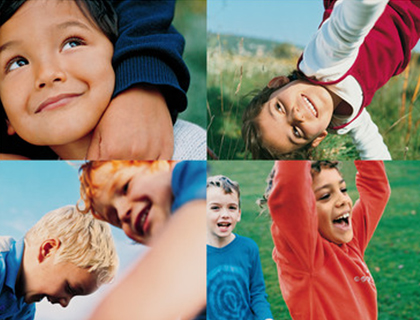 Danone defines its values around the acronym HOPE — humanism, openness, proximity and enthusiasm  -  and sets out to make them an integral part of daily management. 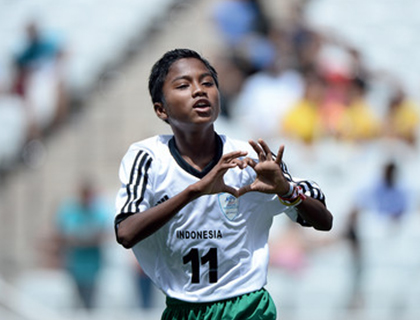 More than a football competition

Danone Nations Cup (DNC) is the world’s biggest international football competition for children aged 10-12. Danone is proud of its project that inspires the dreams of millions of children around the world. It is an opportunity for children to learn about other cultures and, for most, to travel for the first time and to fulfil their potential in the game. 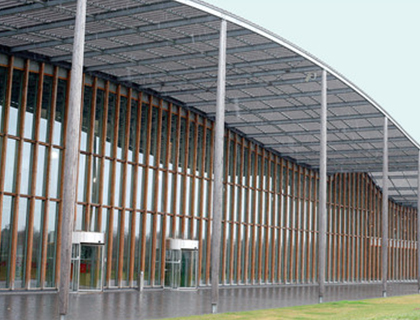 Opening of the Danone Research Center

Daniel Carasso International Research Center is renamed into Danone Research Center and is moved to Palaiseau, south of Paris. The Center becomes the heart of the Group's research and development program; it serves divisions and subsidiaries of Danone around the world. 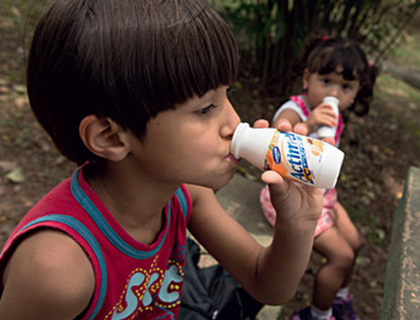 Birth of Danone’s mission: to bring health through food to as many people as possible 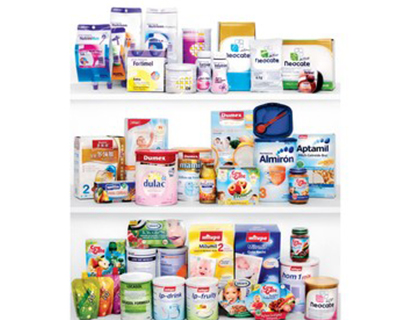 With this acquisition Danone becomes a global leader in the field of early life nutrition and medical nutrition. 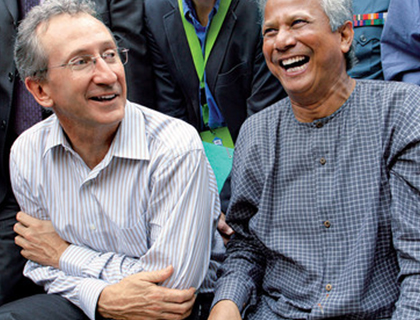 Partnership in the social sphere

Grameen and Danone establish Grameen Danone Foods, a joint venture with an ambitious goal to reduce poverty improving health of children through food using a unique business model, which had been developed together. Danone's next step is a creation of the Danone Communities Fund, which provides technical and financial support to different projects that would bring potential benefit to society. 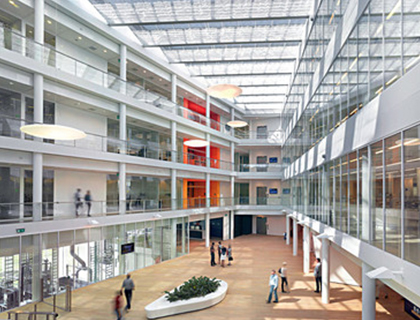 Research ahead of time 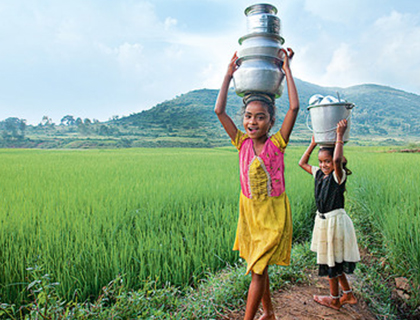 Danone and Mars Inc., two of the world’s leading food manufacturers, launch new innovative investment fund, the Livelihoods Fund for Family Farming. This fund is created to support family farms providing improvement in the living conditions of farmers and their communities. 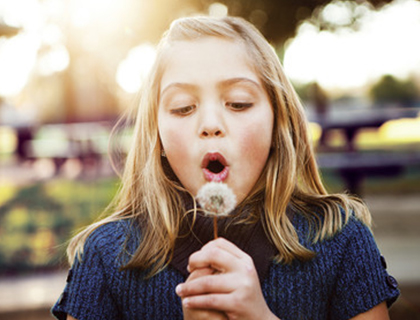 Danone announces its Danone 2020 manifesto, a declaration that defines direction of its activities around the world.

The Manifesto Strategy is designed to transform the company by 2020 and concerns more than 100,000 employees around the world. 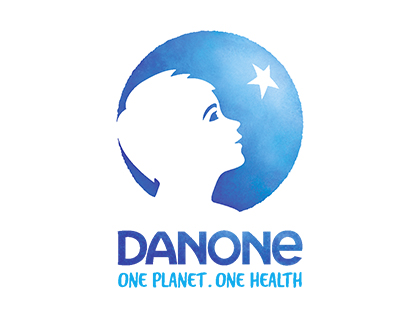 Danone presents its refreshed logo and its very first company signature: One Planet. One Health. urging every consumers and everyone who has a stake in food to join the food revolution. Such changes reflect the company's desire to promote a conscious attitude of the consumers to food. The logo has been refreshed. The boy's image on the logo becomes more realistic and optimistic; it embodies the positive changes and invariable innovative spirit inherent to the company since its foundation. 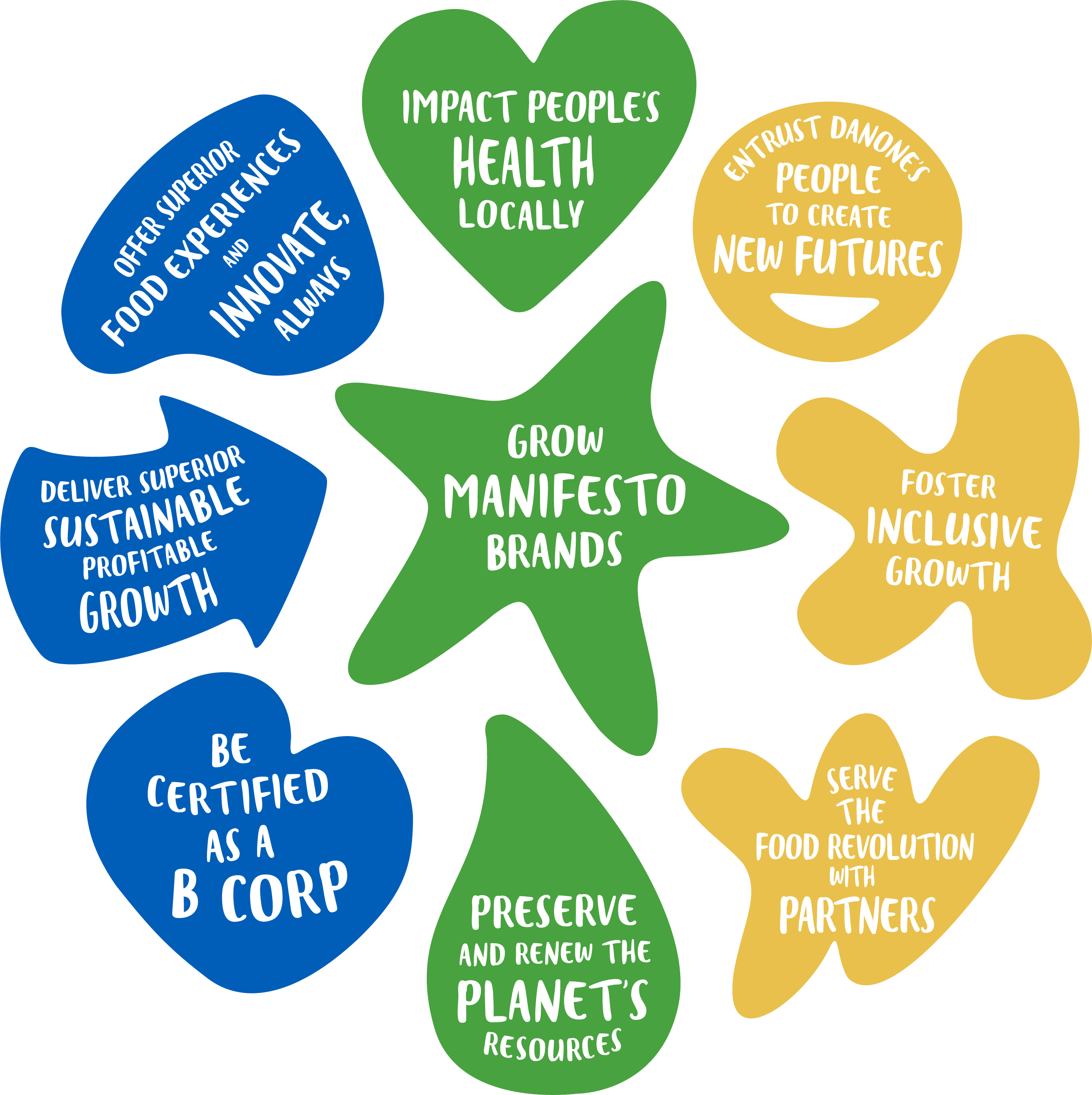 In order to follow our vision and meet the challenges and opportunities of the modern world, Danone set the goals by 2030. There are 9 Goals. Each of them is agreed with the “Sustainable Development Goals”, adopted at the UN summit in 2015 by 2030. 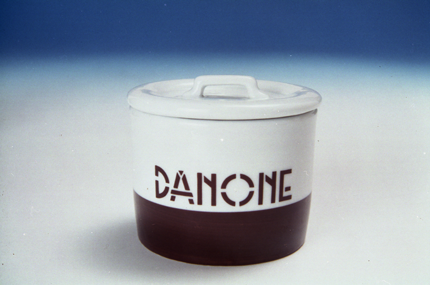 In 1919, in Spain, Isaac Carasso introduces the first Danone yogurt. Being concerned about health of his son, Isaac uses cultures from the Pasteur Institute and the study of Ilya Mechnikov to create a yogurt. The boy’s name was Daniel, but in the family they called him Danone.

In 1919, Isaac begins selling Danone yogurts. The first yogurt pots are sold in pharmacies. In 1932, Isaac's son, Daniel Carasso, founds the Danone plant in the suburb of Paris, and most importantly, a scientific laboratory in which he develops new technologies and recipes for the first yoghurts with fruit filling. And one hundred years after, Danone continues making innovations and bringing health through food to as many people as possible.